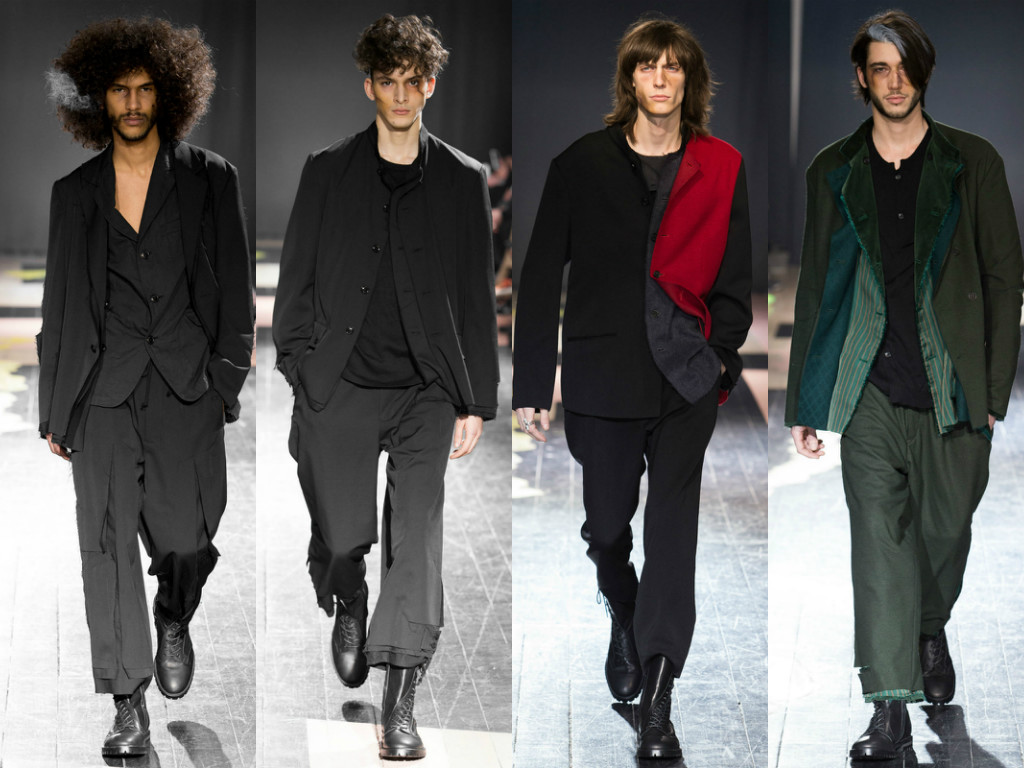 “You go back to her, and I go back to black,” sang Amy Winehouse, and this is a song that Yohji Yamamoto could have sung. Fashion is a hard mistress, and while another season churned out cartloads of the new-and-improved in other brand, he went back to that achromatic constant of his universe.

It was obvious that while Yohji was recycling the past, he wasn’t doing it by reissuing old loves. He’s more the kind to take a knife to his own legacy. Some typical Yohjisms were on display — multiple lapels, deconstructions, visible and unfinished seams, layers upon layers of paper-thin material — but they were repurposed and spliced together. A streak of white ran through artfully mussed coifs, and all had some form of stitched up wound on them — the surgeon isn’t too careful in his cut’n’sew. Retailers love Yamamoto’s black jackets, and we could count the ways on the runway as variations appeared. The reprisal of old tropes around nomadism and recycling appeared clearly in the bisected sweaters roughhewn together. Wide legged trousers a-la-Yohji felt fresh and familiar all at once, proving that as the fashion wheel turns, the world is remade. One model looked like the man himself, only half a century younger, all dark suit and jaunty hat. The only thing missing was the twinkle in his eye. “Have a nice Yohji,” suggested the invitation, and there were plenty to choose from, albeit a bit battered and bruised.

“The past can be used to create contemporary things,” he later said, and this breather in black was obviously his way of centering himself, after previous seasons that were more intensive than they had been in a while. And remember the Lost Yohji notices? There had been a clue right there, but then hindsight is 20/20. As he came out to take a bow, unusually bedecked in shiny baubles, he pointed to his silver bracelet. Nothing Yamamoto ever does it meaningless, so the jewelry launch can’t be that far off. Now that he’s zeroed in on himself, who knows what else he’s got up those long sleeves of his.