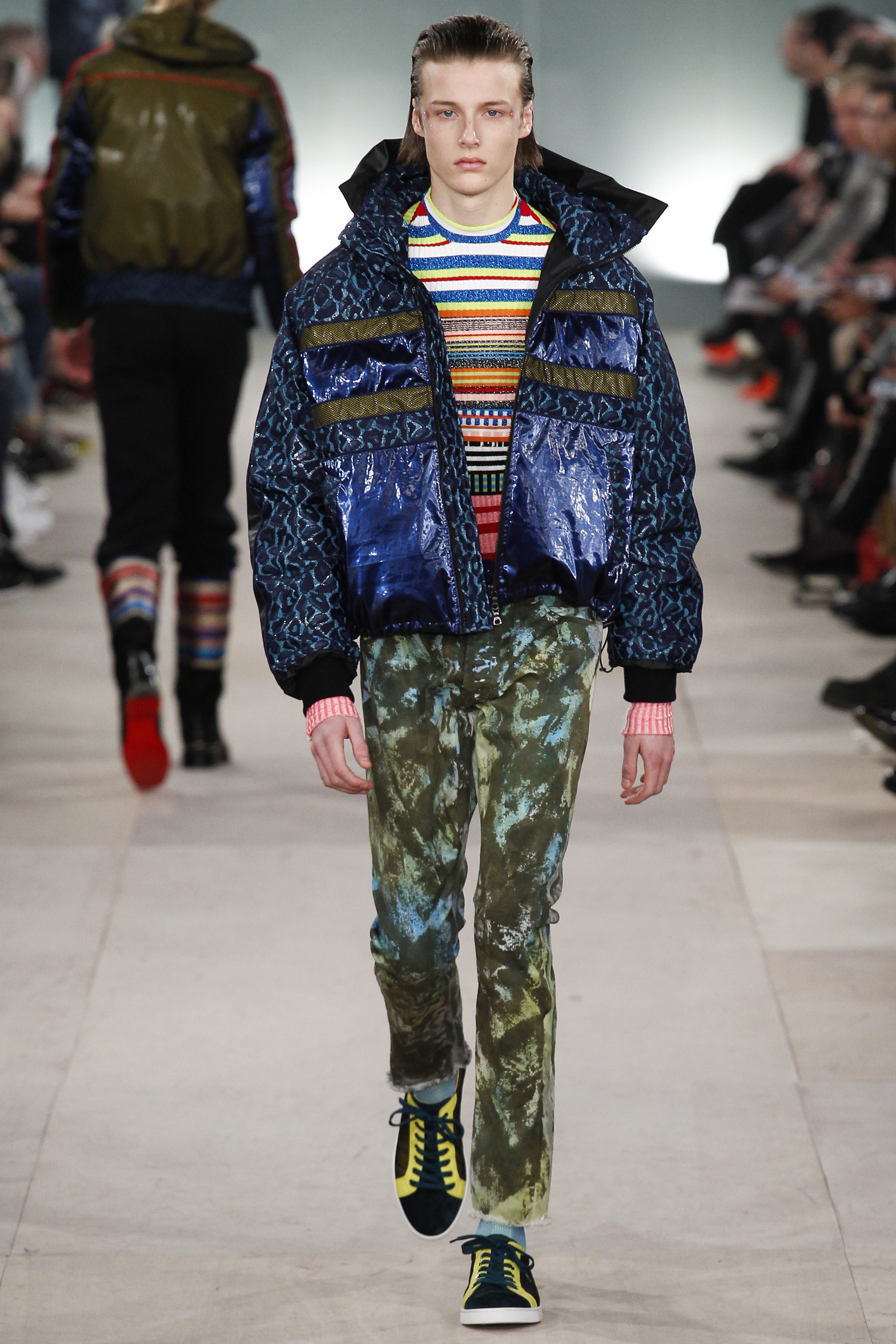 James Long’s clothes are a decidedly acquired taste. There are men among his brethren who adore his Lurexes, his paint-splattered denims, his embroidered sweatshirts and rubberized leopards. Those flamboyant peacocks are not only Long’s loyal customers but his inspiration for Fall 2016. “Local heroes,” he called them, mentioning people like the fine-artist Eddie Peake, whose work often involves lurid colors, vaguely scatological slogans, and plenty of nudity—he staged a naked five-a-side soccer match while studying at the Royal Academy. Apparently, when dressed, Peake wears Long. Preaching to the converted? And then some.

“When there’s so much fashion about, I decided to look at people who actually wear my clothes,” stated Long, after a parade that, depending on your view, was jarring, or just jubilant; loud, or luxurious. There were lots of metallic threads, and lace, and fishnet, and great pileups of psychotropic color as trippy as the opiate poppies that flourished as prints and sweater intarsias. Belt buckles whirled into three-dimensional resin roses. Hair was greased back, eyes smeared with glitter, the calf-high riding boots by Christian Louboutin came in multicolored stripes flecked with sparkle. It was, it’s fair to say, full-on.

The themes of Peake’s work—the absurd meeting the obscene—feel like they’ve met their sartorial match in Long. In the prevalent mood of break-apart, single-piece dressing, you were inclined to view Long’s work not as “looks,” but as individual, intricately wrought items that could be tugged away from the overpowering entirety to work in the wardrobe of a man not part of the designer’s tight-knit niche of (generally East London) fans.

But would you bother? The issue with an aesthetic like Long’s is that it can be disconcerting and distancing to the casual onlooker. Would you pause to paw through a rail of pigment-plastered jean jackets in chartreuse and scarlet to find a velvet tuxedo jacket or, perhaps, a pair of slender, fairly innocuous tracksuit trousers? Or just head somewhere a bit easier to digest?

Long is one of menswear’s busier designers. He’s the new(ish) head of menswear at the Italian label Iceberg, whose chaotic and colorful trademarks fit him well. “I didn’t want to repeat myself,” said Long. “This was editing key things that I love.” Long evidently loves a lot of stuff. A little editing, ironically, would have gone a long way.