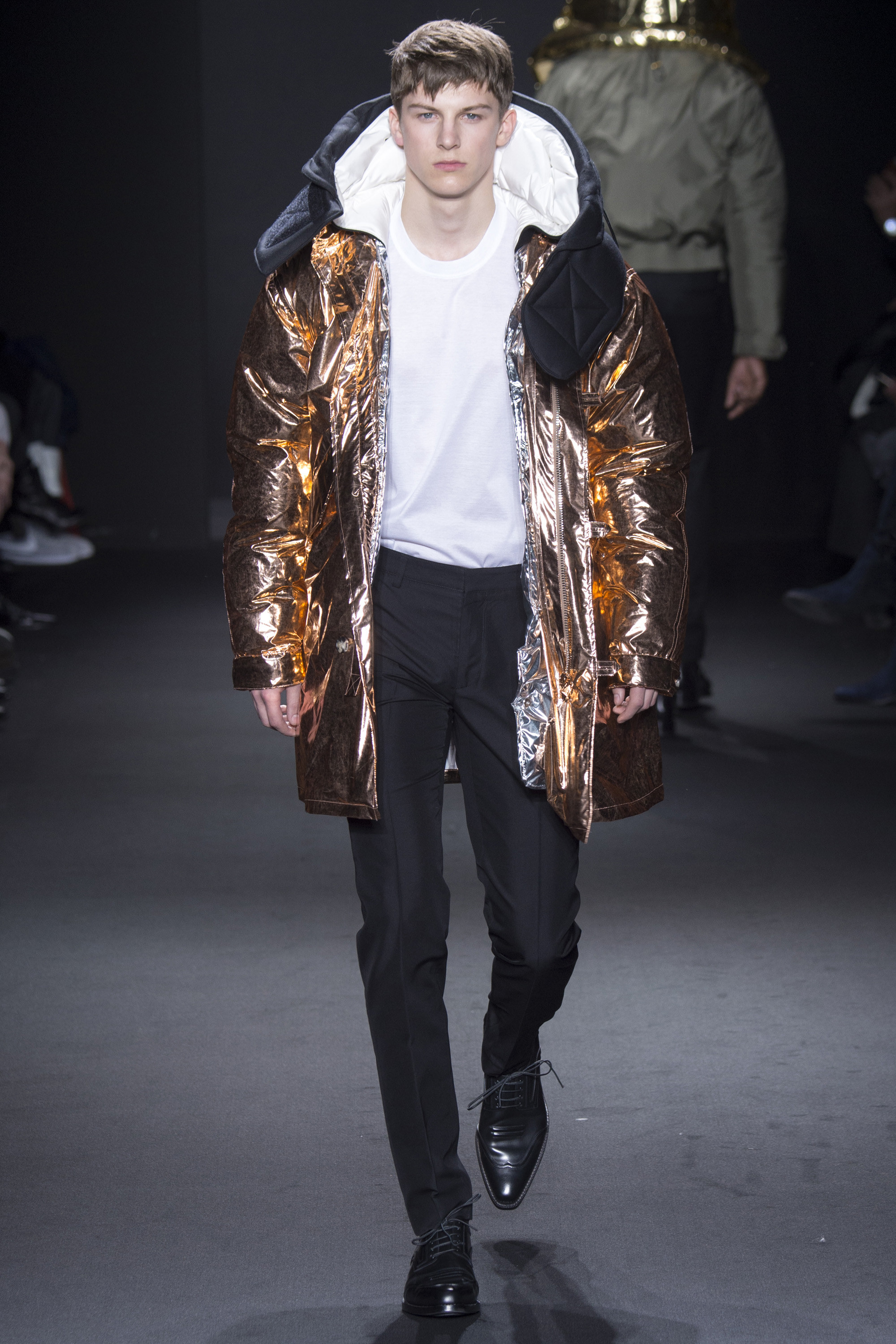 Icon is an overused term across contemporary culture, not just in fashion. It’s in current rotation to describe everything from a hamburger to a pair of underpants. Outside the Fall 2016 Calvin Klein Collection show, thousands of screaming girls chanted the name of Cameron Dallas, an apparent online sensation. “He’s our icon,” one of them said, tears streaming down her face. No one in the fashion fraternity seemed to have heard of him, nor could we work out what he did. It was quite Warholian.

That’s the thing about icons; there aren’t that many that everyone can agree on. Italo Zucchelli has more than a few at his disposal at Calvin Klein, though—garment-wise, the logoed waistband and the world’s first wildly successful designer denims rank up high; there are also those tanned, toned, and semi-clad demigods immortalized by Bruce Weber, the kind of guys those teenage girls would have been screaming for 20 years ago. Foiled nylon in gold, platinum, and rose-gold framed the faces and bodies of those mens’ contemporary counterparts, the buffed-out models that make a Calvin Klein show look utterly different from anything else in menswear. I couldn’t help but think they looked a little like gilded Catholic icons of suspiciously good-looking saints. But maybe that wasn’t intentional.

Zucchelli built his collection this time around on another icon: the man’s suit. “I wanted to show the universal power of men’s tailoring,” he said. He decided to do that by putting his men’s suits on women for the first time—the boldface model likes of Mariacarla Boscono, Iselin Steiro, Jessica Miller, and Gemma Ward. They’re not exactly Linda, Christy, Claudia, and Naomi, but the former foursome, they do have an instant-recognition factor. “It’s sensual, sexual,” said Zucchelli of those Calvin suits, worn over bare skin by male and female alike. They were impeccably cut—sometimes so perfectly you didn’t realize quite how they built out the muscular models into Superman proportions. Not that they weren’t already naturally endowed: It takes a special type of man to look good in the CK-waistbanded long-underwear-as-outerwear that bottomed suit jackets at the end of the show. We all know what that means.

Transformation, however, is a fascinating theme in fashion—and particularly here at Klein. Zucchelli transformed denim into a jacquard, painstakingly woven in a trompe l’oeil of daily wear and tear, making the everyday precious. Zucchelli first used that jean jacquard for Spring—so they lacked the pleasant frisson of surprise. Ditto the foiling, which was reminiscent of a very specific Helmut Lang collection. No one was foiled. Alchemy was the reference Zucchelli tossed out—apparently, it’s something he’s wildly enthusiastic about, and has a library full of reference books on the subject. It did make sense, both as the ostensible inspiration behind all that metallic nylon, pumping up the visual impact of utilitarian anoraks and MA1 jackets; and perhaps of the front row presence of the enigmatic Dallas. Judicious googling ascertained he’s has been transformed into pop culture platinum via the alchemic power of 21st-century social media (apparently, he’s an especially adept user of the social media platform Vine).

Did Zucchelli alchemize gold from Klein with this collection? Not quite. The suits were slick, but serviceable; the metallic linings were arresting, but they felt restricted to editorial. There wasn’t enough of that truly iconic Klein branding, either. On the whole, Zucchelli delivered a show that was a fairly solid silver, clad in a well-cut black suit.