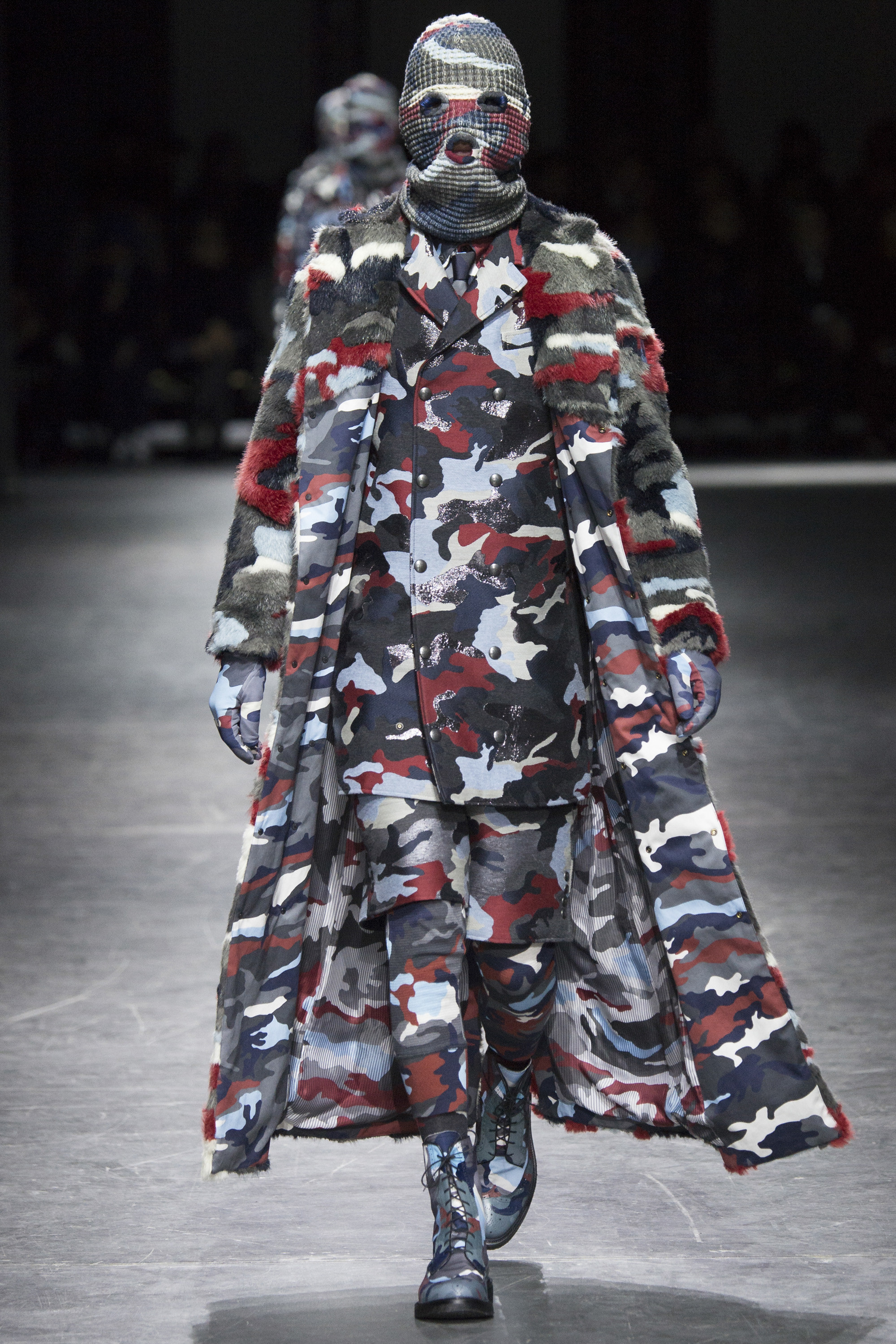 Fashion can sometimes exist in a bubble — insulated from the gloom and dreariness of world events. In the case of Thom Browne’s Moncler Gamme Bleu collection for fall, the bubble was a particularly big one — and the effect, unnerving, given the heightened security measures at the Milan shows this season.

Browne’s singular theme was camouflage and he took it to the extreme, dressing models down to their combat boot-clad toes in a swirling pattern of red, light blue and black on a gray background. On top of the military pattern, each model wore some form of balaclava-like mask. All of them had matching painted faces — and wore bright pink curly eyelashes.

Asked about the styling, given that balaclava-wearing terrorists have been storming tourist hot spots the world over, Browne said he didn’t intend to make any untoward connections.

“For me, it’s just camouflage, almost like a sportswear camouflage. It was done more in a sportswear way, and had nothing to do with anything politically going on.” As for the pink eyelashes, Browne said: “I think a lot of people may see camouflage and think something, the eyelashes threw off the intensity.”

Remo Ruffini, Moncler’s chairman and chief executive officer, also was asked about the surprising style touches given the world’s political situation. “This is military alpine; it’s less about the product and more about the concept,” he replied.

As for the actual clothes, they were in countless iterations of the same print done in a variety of techniques and materials. Jackets came embellished with sequins, trousers with studs, while a boiler suit was quilted. The play on proportion and texture was a clever one, forcing viewers to look twice at the mix of layers, materials and diverse proportions.

Browne said every fabric and look was different.

“I like the overall impact, but really each piece stands on its own in regard to the printed leathers, to the intarsia men’s wear fabrics and furs, the technical fabrics, the printing on the men’s wear fabrics,” said the designer.

At the end of the show, models took their seats inside a transparent box as little balloons matching their outfits flew around their heads. “It was a snow globe,” said the designer. “The globe was not possible, so I made a snow cube.”