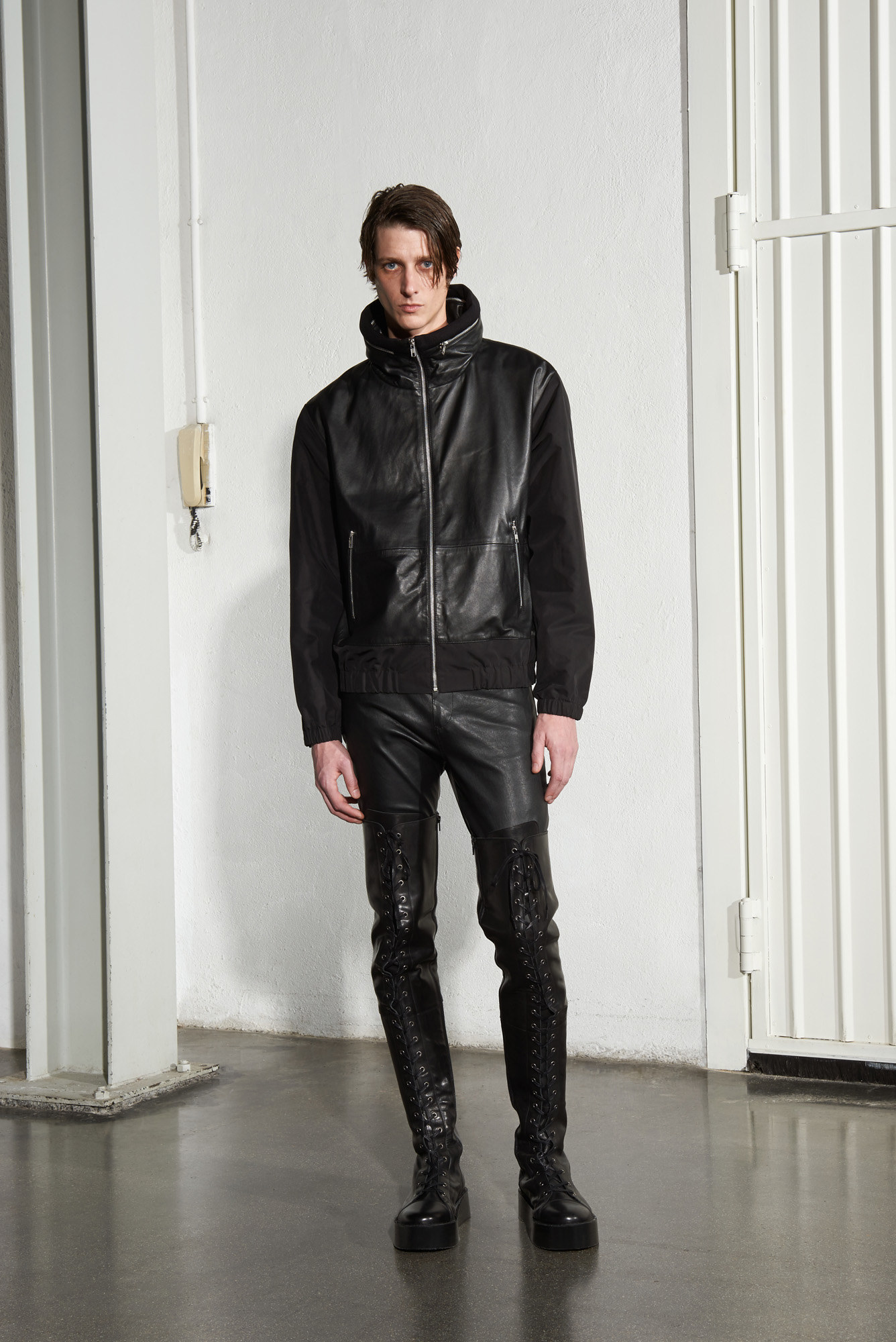 There was one really unexpected, outlying look in the new McQ collection: a matched set of leggings and a turtleneck in a brilliantly colored Fair Isle knit. What on earth was it doing there, amid a sea of tartan and black leather and moody burgundy cotton-wool suiting? The look turned out to be the Rosetta stone for the whole collection, as it nodded back to the season’s key reference, Phyllis Galembo’s photographs of African and Caribbean men dressed up for carnival, collected in her book Maske. Hence the wild color. The Fair Isle pattern was a tip of the hat to the Scottish roots of Lee McQueen, as were the kilt-inspired voluminous trousers and the aforementioned tartans. Galembo’s photos are worth a look, but as mood board material goes, they made for an odd fit with McQ’s updated rude boy aesthetic, which probably explains why Sarah Burton and her team dialed down Galembo’s influence to a volume just shy of a whisper. The “mask” idea was incorporated at an emotional level, as the collection explored the tension between the tough-guy face men feel compelled to show to the world and the more tender adolescent self that lurks inside, even after the teenage years are far in the past.

The sense of shielded-ness was communicated most forcefully—and with great commercial appeal—by the collection’s quilted leather outerwear. It was likewise present in the lineup’s stripes and checks, so caustic in color and so graphic that they read like bars or fences. A red-and-black striped sweater got at the tough versus tender dichotomy nicely, setting off the bar-like stripes and threat-level-imminent red with a gesture of vulnerability, elongated sleeves that fell over the hands. Elsewhere, there was a similar emotional resonance in the revelation that seemingly hard denim was actually jersey printed to look like distressed jeans.

Still, the best looks here were the ones that continued to evolve the silhouette that’s emerged as a McQ signature: The kilt-inspired trousers, as full and fluid as skirts, were carried over from last season, and also adapted, in somewhat more circumspect form, into pairs of relaxed cropped pants. It’ll be a while before any bankers turn up to their Wall Street offices in a burgundy McQ suit featuring those kilt trousers, but they insist upon the silhouette so convincingly, that day may come sooner than any of us suppose. And why not? Surely, tender hearts beat inside the breasts of would-be Masters of the Universe, too.