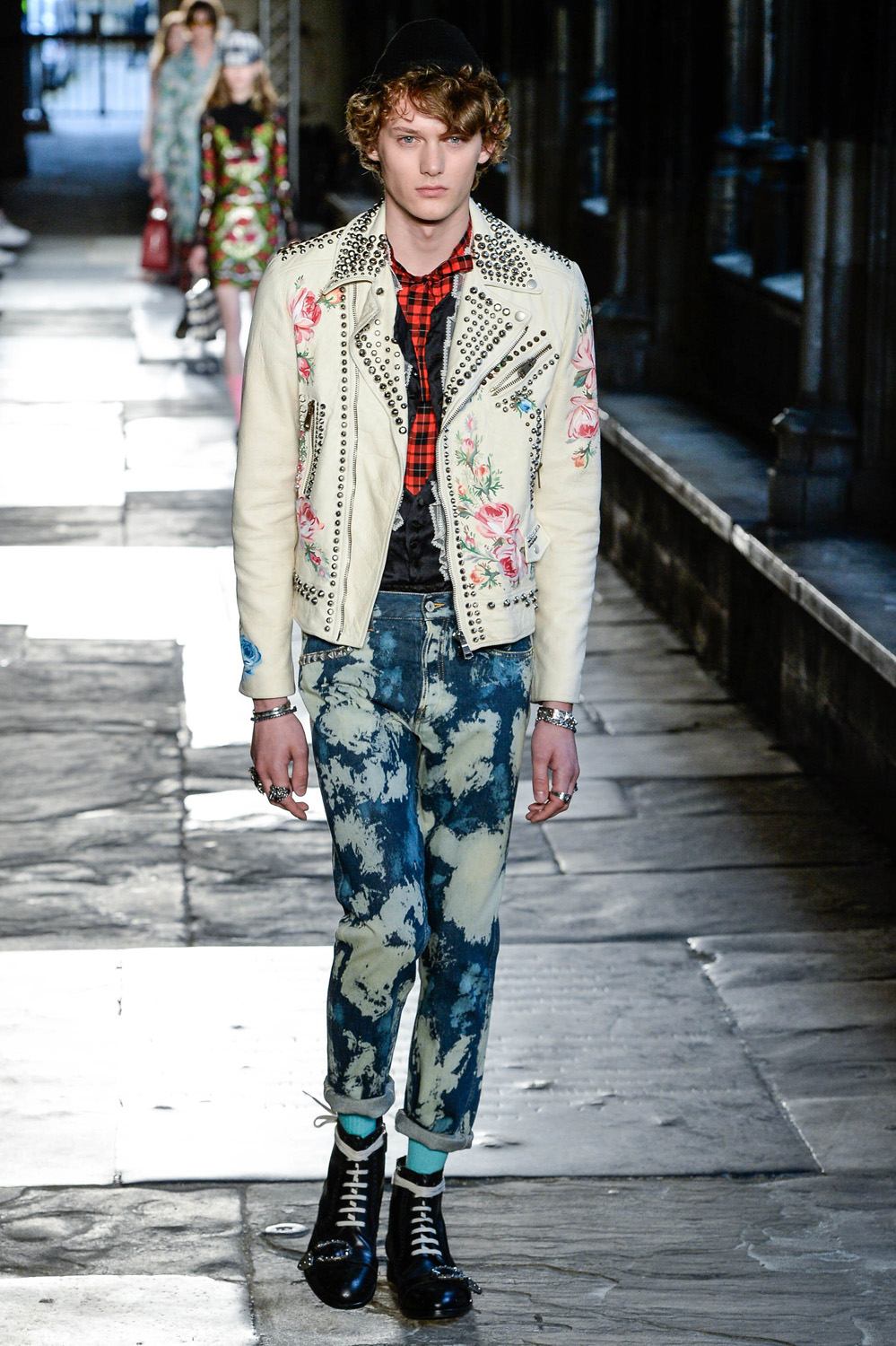 Queen Elizabeth II was crowned there, Princess Diana had her funeral there, and Kate Middleton and Prince William were married there. And now, Alessandro Michele has thrown a Gucci fashion show at Westminster Abbey. Cue predictable disapproval from British traditionalists—even though the Resort collection was shown in the Cloisters, not in the hallowed Chancel where British monarchs have been crowned for centuries. But this could not have been a more sincere compliment to English tradition, as filtered through the hyper-colored, hyper-eclectic sensibilities of an anglophile Italian. Asked why he chose London and the Abbey, the enthusiastic Michele threw his arms to the vaulted roof: “To dive in this gothic sea of inspiration!” he exclaimed. “The punk, the Victorian, the eccentric—with this inspiration, I can work all my life!”

It was a vast, mesmeric show of 94 looks, boys as well as girls, each one of them densely packed with detail, embellishment, and referencing art, interiors, and the piled-up layers of the archaeologies of British youth culture and street markets. There were debs in dresses that might have been back-dated to a mother’s coming-out ball in 1970; yobs in stone-washed skinhead jeans; Kensington grannies in printed silk dresses of the Thatcher era; ’90s Spice Girl monster boots and Union Jack sweaters; and a country lady with a padded husky that had somehow crossbred with a gilded, frogged hussar’s jacket. There were kilts, both posh and punk, and that is not even the beginning of an inventory of the items on show.

Of course, it was all a very cleaned-up, immaculately made Italian version of the ramshackle scruffiness and don’t-care-what-anyone-thinks attitudes that actually characterize the British of whatever class. Along the way, he touched on some of the subversive styles British-born designers have contributed to the national archive of fashion, from echoes of Vivienne Westwood and her tartan bustier ball gown to the pretty-baby Victoriana of Edward Meadham of Meadham Kirchhoff. Still, in many ways, this was a continuation of everything people have come to love about Michele’s work since he took over such a relatively short time ago—from his animal-symbol embroideries to the glittery bombers, down to the embroidered bags and pearl-studded loafers. All in all, it was a moving snapshot of what luxury fashion has become since Michele came along to reset it: not one single identifying look, but almost a hundred, and within each one, something accessible, be it a hair ornament or a pair of jeans, to pull in the next generation of customers.

On a final note, Michele made a tangential remark, which may resonate more with British minds than any of his Wedgwood prints, china-dog appliqués, or punk-strapped shoes put together: “You are part of the culture of Europe!” That is really something to think about. At the end of this month, the British people must vote on whether to remain in the European Union, or whether to sever the long-standing ties that make it so easy and natural for Italians such as Michele to come to London to visit and to work, and vice versa for the British. To stage such an appreciative celebration of the borderless to-and-fro of fashion, in a building right opposite the Houses of Parliament? Let’s hope that swings a few votes in the right direction.