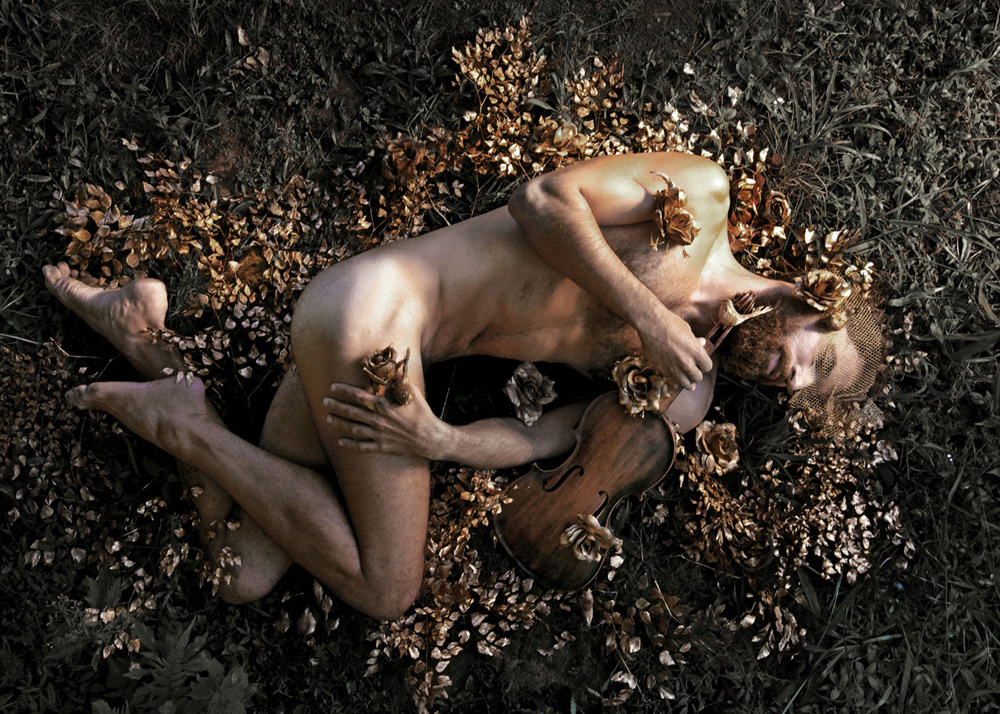 The concept for this editorial is inspired by the book “The Auschwitz Violin” by Maria Angels Anglada. Her historical narrative depicts the hopes of Daniel, a Jewish craftsman, who, amid the horror of genocide within an Auschwitz concentration camp at the time of the Holocaust, seeks salvation through his gift and passion in the art of building violins. His efforts to achieve musical perfection by creating a sound, pure and precise, was implicit to his survival of the day to day horror of the gas chambers. The photographic work within this editorial explores the metaphorical concept of a unique, poetic and sublime pain. The guilt of survival and fear of impending death are intertwined in this emotional portrayal, which reflects upon the timeless inspiration of art, music, poetry, fashion and literature, and captures the essence of the artist’s cultural and social contribution, undeterred through hardship. The sentiment of this work transcends time, reflecting on a cruelty somewhat incomprehensible to the contemporary world but reminiscent of current ongoing cultural, political and humanitarian crises. The dichotomy of gold and black within this editorial, superficially whimsical yet with a dense and heavy undertone, is inspired by the designer Thom Browne, based on his winter 2016 Paris collection. The golden colors seemingly predominate in certain frames but express a cold opulence, representing Kanadá, items taken from Jewish prisoners considered to be of value, such as money and gold (including the gold teeth of victims), which were sent directly to the German Central Bank. Black colors represent the bleak authoritarianism of Nazi Germany and, amid the darkness, we are reminded of the slavery and encouraged to mourn for one of humanity’s darkest times. Nudity in this work emphasises the torment and undignified death of the innocents who died inhumanely during these atrocities.
Credits
Model: Diego Volpi (L’Equip Model & Arts Brazil)
Photography: Katia Reis
Executive and Lighting Production: Anderson Henrique Rodrigues
Art Direction/Styling & MakeUp: Evandro Gueiros
PhotoRetouch: Evandro Gueiros
Brands: American Apparel, Zara Men, Diesel, Caras Kaytara, Mário Queiroz, Gisele Bündchen for C&A, Cat, Galeria do Rock, Zoomp, AllSaints, TopMan
READ  Diesel Denim S/S 2015 Lookbook