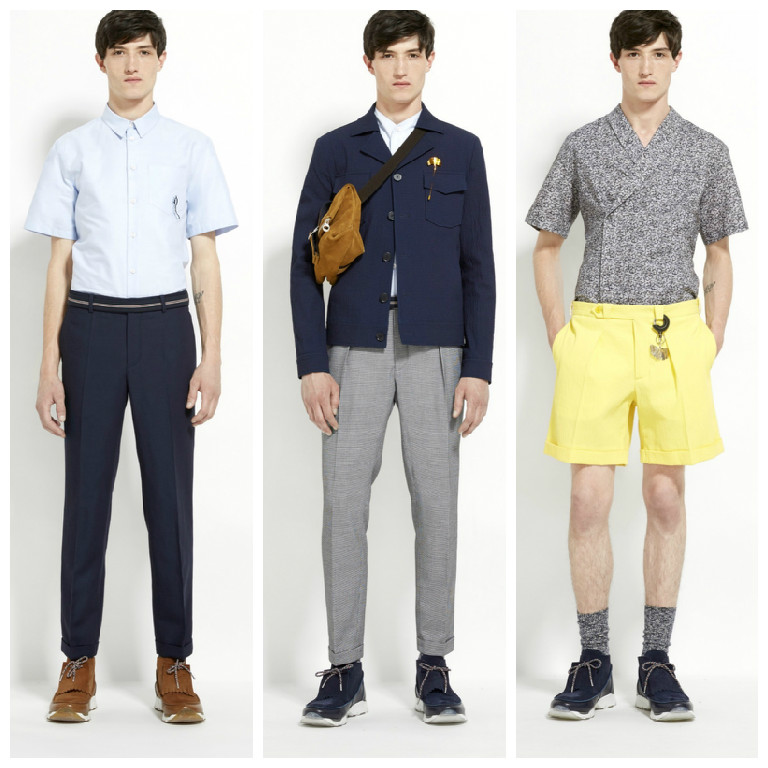 Stencils of ginkgo leaves lined the steps and floor leading up to the Carven showroom, which had been walled off with perforated gingko-patterned paper screens. This collection marks Barnabé Hardy’s debut as menswear designer for the brand; and if turning over a new leaf wasn’t directly implied, his self-confessed superstitious side made sure the gingko was well represented (stitched onto a mahogany suede jacket, rendered as corsage pins or charms hanging from leather cord, and integrated into a shirt pattern). If this sounds almost hippie, it wasn’t representative of the overall look, which veered largely city sleek, alternating minimalist shawl-collar shirting with graphic, streamlined sportswear. Hardy explained how the shifting interplay of light and shadow within the architecture of a modern environment led to windowpane patterns, swirling embroidered motifs, and a trompe l’oeil placket down the front of a jacket. But to touch his irregularly quilted coat (a variation on the old-fashioned technique of boutis) and the enlarged basket-weave jacquard was to realize his appreciation for tactile detail and how a little savoir faire can go a long way. While there’s a chance Carven customers won’t detect a difference between this creative changing of the guard, new zipper hardware—a C within a circle—reveals a new imprint. Given that the brand’s menswear history is still so fresh, Hardy is in the privileged position of strengthening Carven’s codes on his own terms. He’s certainly off to a strong enough start.