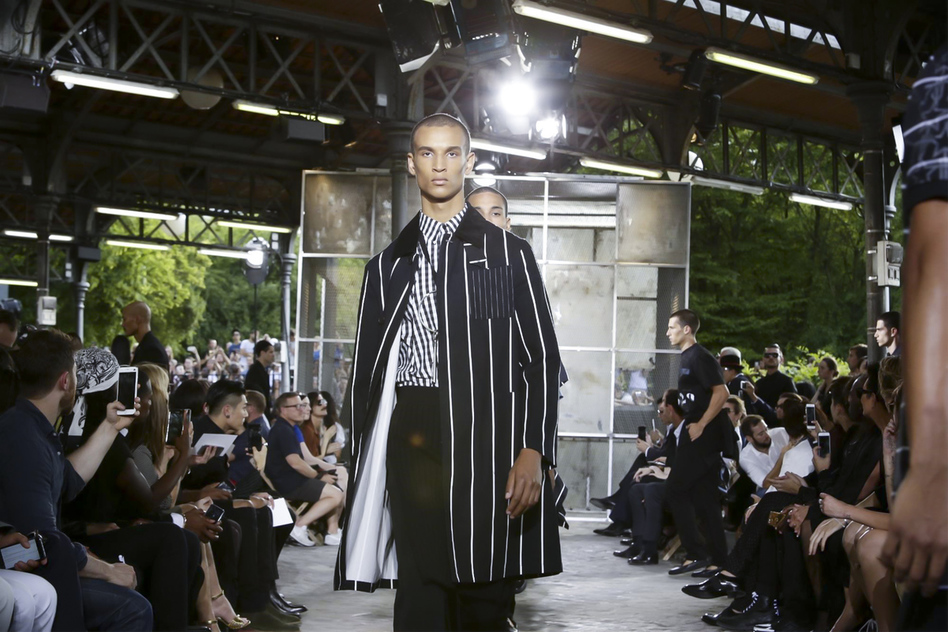 “Bad boys and bad girls,” was how Riccardo Tisci summed up his co-ed Givenchy show: prison stripes and rugged workwear for him: gauzy lace couture gowns for her as the designer pre-empted Paris couture week with 10 exits, culminating with Naomi Campbell in a sparkly blazer and little else.

Here was another powerful outing from Tisci — impressive in the restraint he used in exploring the lockup theme, and in the couture finesse he applied to sharp, hyper-masculine tailoring and streetwise sportswear alike.

Tisci’s self-declared “obsession” with American workwear was plain in his use of mechanic colors, bandanas and overalls, climaxing with a couture version of the latter for her, sparkling chains demarcating the stitching.

“If this doesn’t bring denim back, nothing will,” one guest said afterward, referring to the beefy indigo coats with leather trim, the lean color-blocked jeans, and the pale blue or coal black denim boiler suits, ghostly images of Jesus on the cross-embedded in the fabric.

The religious imagery, stripes and checks were the main print stories, but did not upstage new shapes: boxy T-shirts and scrubs, strict dress Bermudas and strong-shouldered suits and topcoats. Bucking the slouch trend, Tisci’s tailoring was all precise lines and compact fabrics — not an ounce of fat in sight.

This open-air show had the usual electricity — The Martinez Brothers spinning dark-hearted beats as models stormed over steel staircases and through metal cells.

Tisci’s done 10 years at Givenchy, and he has become one of the pillars of the men’s season.