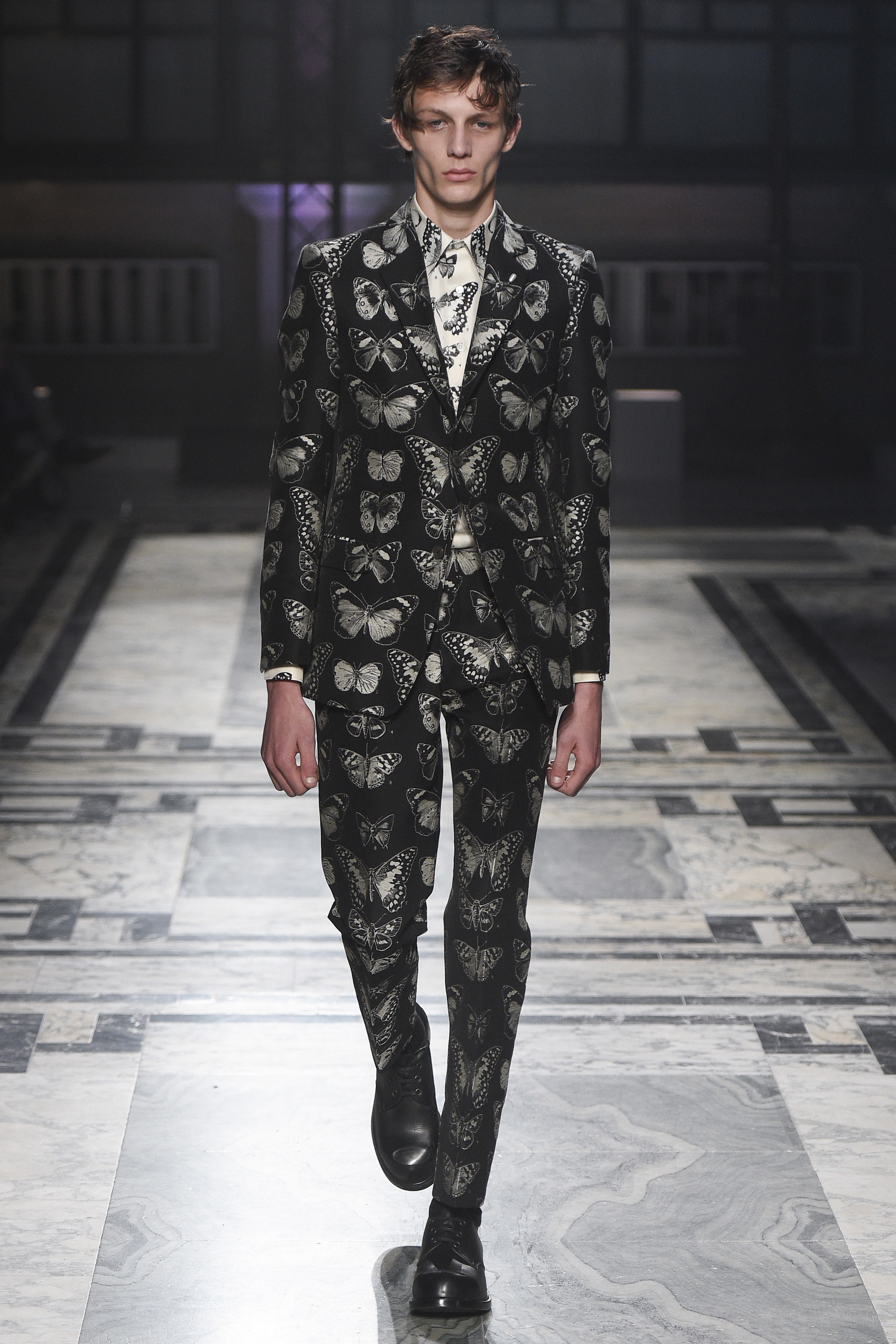 The challenge facing Sarah Burton each menswear season is considerable, yet can be concisely summarized: How to work within the McQueen confines of tailoring, without winding up on the stuffy side of the fence? The label’s founder apprenticed at one of the starchiest and most traditional houses on “The Row,” Anderson & Sheppard, making suits for the Prince of Wales. But he used that tradition to buck the system—more visibly for women, granted, on whom an impeccably tailored menswear suit can look sharp and a little subversive, rather than staid.

For Burton, some seasons are more successful than others. Like this Fall. The designer started off, she said, in the London museum devoted to Sir John Soane. That ignited an interest in collecting, specifically in Charles Darwin and his voyages to accumulate specimens. “Talismans,” Burton called them. “Collecting, traveling. Obsession.” Obsession is a great word for McQueen clothes—and this collection was obsessed with McQueen talismans. The specimens Burton alighted on were butterflies and moths, examples of which were woven into the very fabric of her tailoring—jacquards laid out like a lepidopterist’s dream ensemble, or embroidered in swarms across coats and blazers.

Moths are, of course, a McQueen talisman—live versions appeared in two of his shows, their likeness in numerous others. They were the most evident manifestation of a number of classic McQueen references here today, culled from collections for him and her alike. For Fall, Burton’s McQueen men had their own contemporary savage beauty, with their punkish, pierced faces, cheeks seemingly impaled on safety pins dribbling filigree chains. “I would never dare call it ‘street’,” Burton balked. “But I wanted it to feel relevant to now.” The collection did, even when it boldly trod on Lee McQueen’s toes, in frogged hussar’s jackets and red barathea wool scrolled with jet, couture, and Victoriana melding together. Those were atypical menswear, but typical McQueen. The menswear references were archetypal British tailoring—officers’ mess dress, voluminous greatcoats, tautly cut double-breasted suiting. The feminizing touches were subtle—ribbons of velvet hemming coats, or as tuxedo-stripes trailing past hemlines, embroideries of jet and diamanté, and all those butterflies. But they had impact.

“I wanted to take the stuffing out of it,” said Burton. She was referring to softer tailoring specifically—silk jackets and coats based on foliate oil paintings, for instance, or the chiffon overlay on wool. But she could have been talking about the collection in general, where wing-collared shirts were starchy but came without ties and trousers, slouched over down-heel sneakers.

Burton could also have been talking about her kid-glove attitude toward Lee McQueen’s legacy—a legacy that has been seen by more than a million people, across two continents, in that “Savage Beauty” retrospective. That was womenswear-specific, but there has thus far been a hangover in her menswear shows, which have sometimes felt like museum pieces, staid and reverential; and other times like a museum’s gift shop, packed with crass looky-likey spin-offs designed purely to make money.

Subtly deferential rather than overtly referential, covetable rather than commercial, this McQueen collection trod another path—namely, its own. That Burton is able to do this without abandoning the house’s hallmarks and legacy is a mark of her swelling confidence, evident—finally—for men and women alike. This was as strong as any show she’s presented in Paris. The McQueen moths summed the whole thing up: They originated in memento mori, Renaissance paintings packed with hidden meaning that act as reminders of our own mortality. There, moths and butterflies symbolize the soul. It’s appropriate that they proliferated here, because soul was something this McQueen collection had in spades.