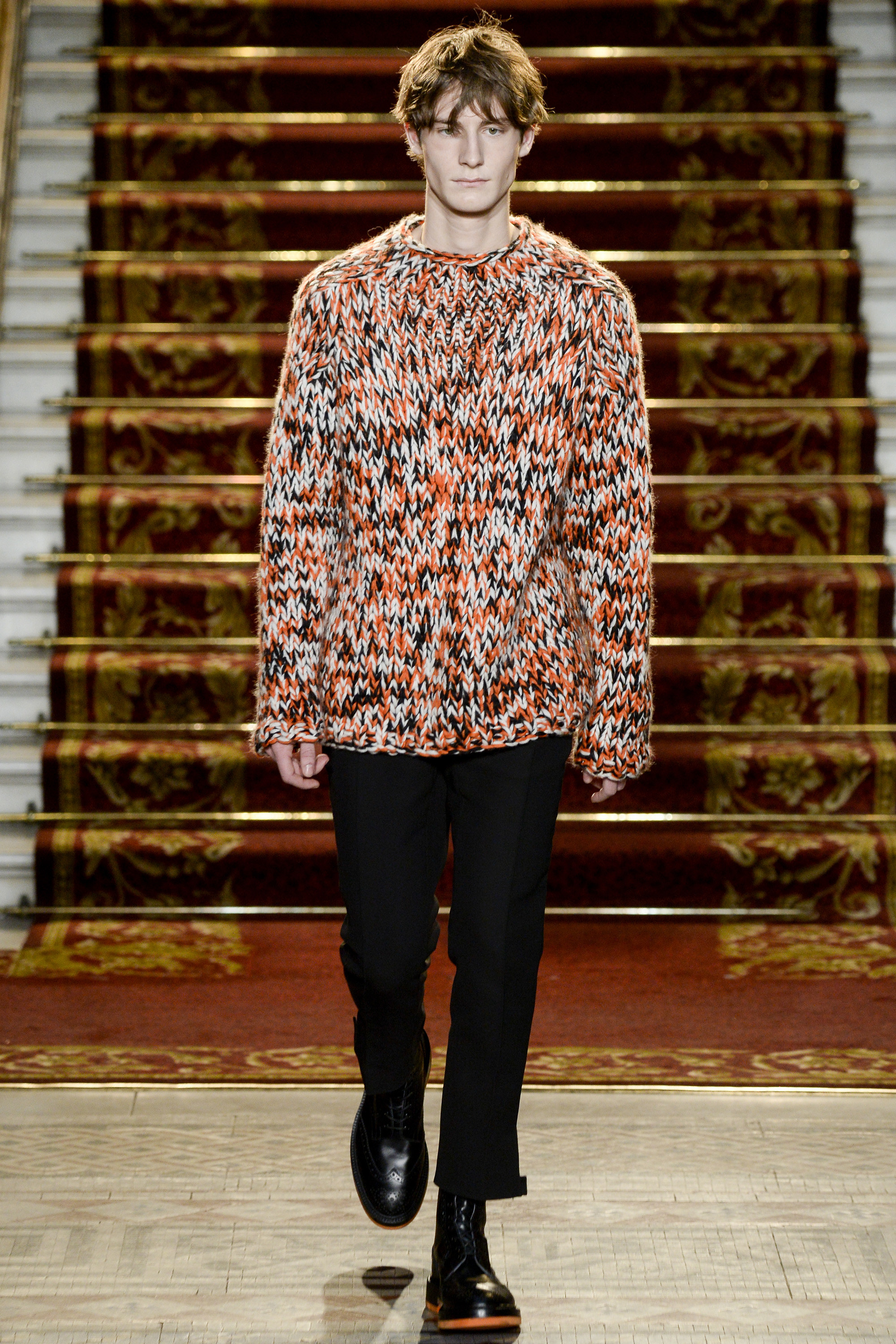 As he perused an Agnes Martin exhibition recently, Massimo Nicosia was struck by a quote describing her work as, “a repetitive use of a repetitive medium.” The man at the helm of Pringle of Scotland, which has been honing the medium of knitwear for 200 years, felt an epiphany of affinity. Like Martin’s, Pringle’s visual language contains a great many grids; argyle (of course); tartan; the grids of stitching and crochet, and checks. Hence Nicosia’s succumbing to the full embrace of the grid for this season. Crochet flashed low-resolution orange pixels against white and black. Argyle panels that looked to be lambskin fronted V-necks under fine-gauge turtlenecks below. Prince of Wales check, a warm loden and berry tartan, or checks of differently scaled houndstooth featured on jackets. His patterns were not bound by the right angle: One monochrome Fair Isle whose lines angled and jarred at each other must have been a fascinating challenge to produce.

The outerwear—either parkas and duffles or knee-length gilets—was often broken into yet more grids, panels of nylon or tartan or plain wool. One off-the-reservation look was a sleeveless black turtleneck waistcoat completely open at the back and fastened to the body by a shoulder holster strap like an extremely lustrous bib.

Silhouettes were nipped precise on the leg (tailored cropped trousers with a touch of swing) but roomy up top (coats and knits were oversize and the models wore arm-warmers to facilitate gather at their wrists). Many of the knits fell lower than the jackets above them, and were here and there cut away at the hem. There was a great deal of gridding but the check-shy were served too—a duffle coat in wool with a raised felted Aran relief was especially fine.

Very wonderfully this show was held in the Reform Club, a usually impregnable mink-lined members’ den on Pall Mall that was founded as a venue for the liberal wing of early 19th-century Parliamentary politics to foment liberal policies. Nicosia is generating his own reforms at Pringle, and if they sometimes seem a little obtuse they are nonetheless worth subscribing to.