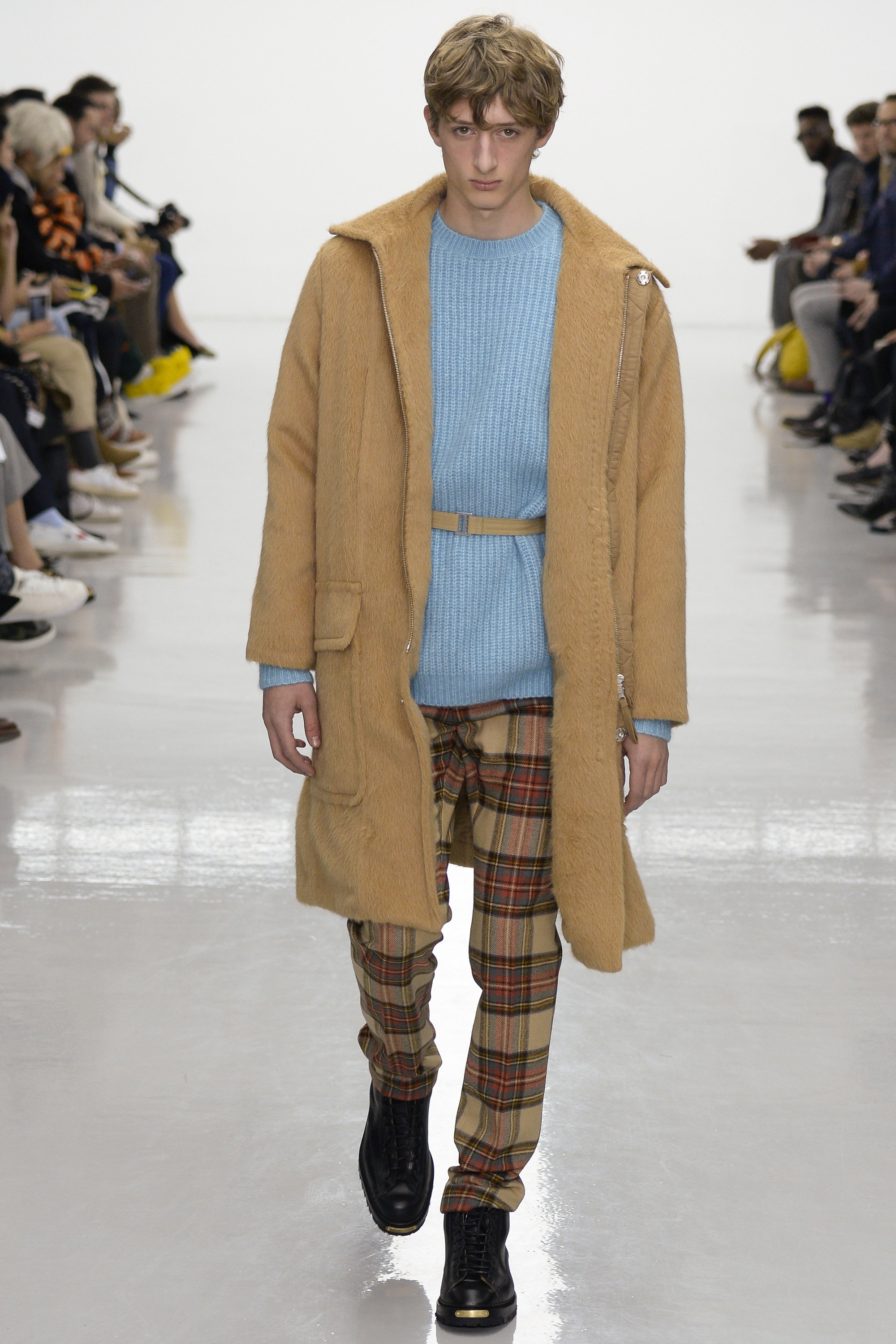 It’s tricky to say a lot when you’re whispering, especially when everyone around you is making so much noise.Lou Dalton often seems like the quiet one when it comes to London menswear, with her focus on noble fabrics, traditional techniques, and the kind of bog-standard garments that frequently don’t warrant a second glance, especially when up against neon sweaters, lace pantaloons, and skirts for men. Beau Brummell, that mainstay of masculine sartorial silence, would love what Dalton does. John Bull would never turn around in the street to gawp at one of her coats.

But what Dalton does, when it’s really good, rises above the fuss and muss of many of her competitors. It did for Fall, where she looked to Shetland: home of the sweaters, if not of the designer herself. Although apparently she likes to visit, and likes the men she finds there. This collection was an ode to the fisherman, the farmhand, the stable boy—only it didn’t wind up camp or theatrical, but rather earthy and real, from hob-nailed boots to ruddied cheeks (the latter courtesy of MAC Cosmetics).

As befits a collection dedicated to Shetland, the knitwear, intricate but not overpowering, was a strong point, as was the color palette. That’s all Dalton’s own: A memorable clashing look was a cerise shirt with oversize plaid jacket padded like a life vest, paired against a generous swathe of camel.

Do they get camels in Shetland? Maybe not. They get sheep, whose markings became digital prints and whose wool was used by famed British craft knitters John Smedley to create merino polo-necks and long johns. They also get lots of rain—Dalton lacquered jerseys and used showerproof velour, a fabric that I’d never heard of either.

I suspect Dalton is a covert sartorial fetishist. I don’t mean she’s into straps and whips, but rather the more interesting stuff, like an obsession with painstaking tweaks and details (dropping shoulders almost infinitesimally, widening tailoring a touch) or a fixation on those odd materials. Many look tricky to work with—tailoring that laminated jersey must be about as simple as sewing together garbage bags, say—but it’s a mark of Dalton’s proficiency that it wound up seeming easy to wear. The same couldn’t be said of teddy-bear fur, fluffed into sweatshirts (okay) and pants (not so). The latter called to mind a line in the great 1994 Isaac Mizrahi documentary Unzipped, when Mizrahi sensibly nixes a faux-fur jumpsuit with the immortal line: “It’s about women not wanting to look like cows, I guess.”

Guess what? Men don’t want to either. They shoot cows in Shetland, don’t they?