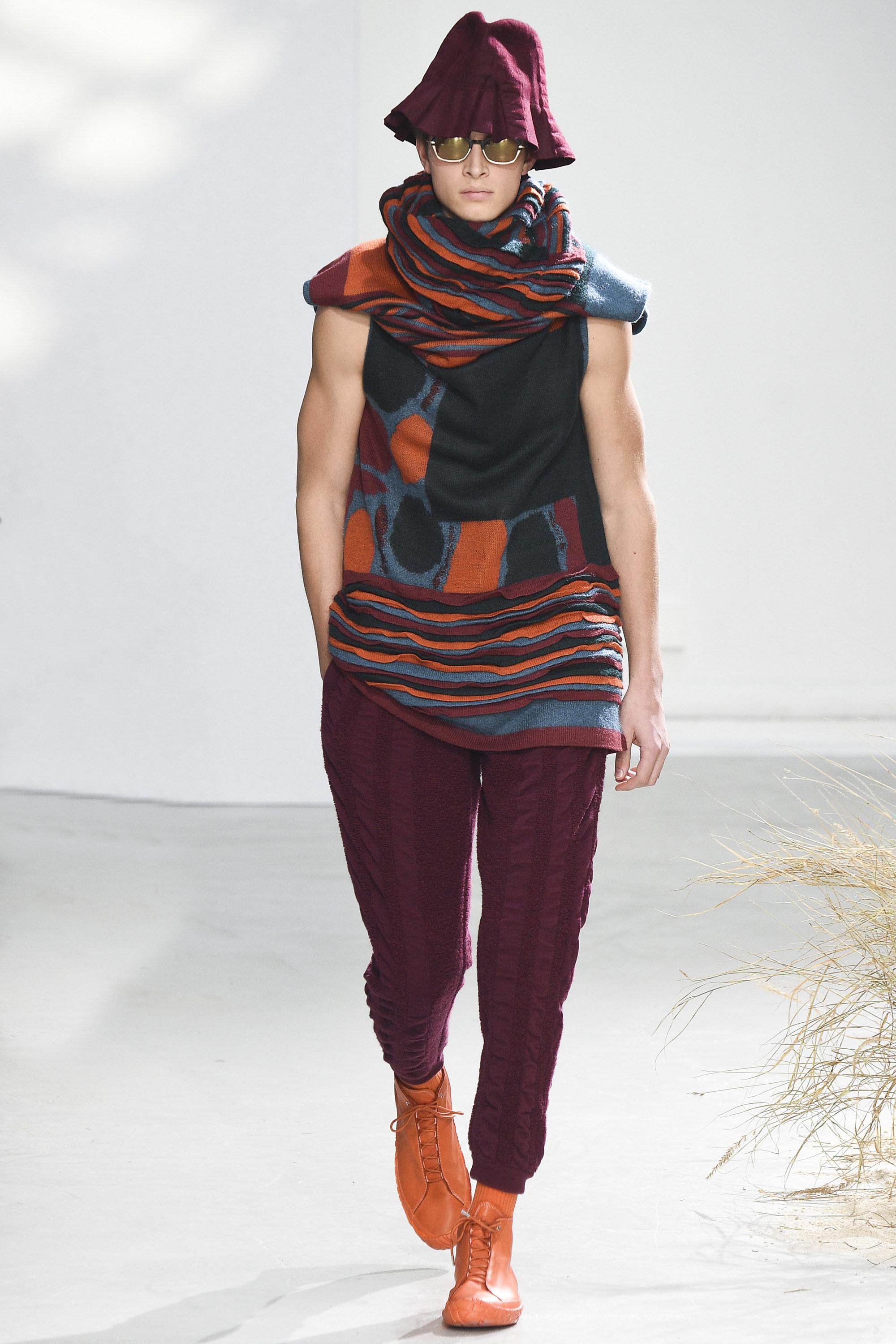 Each season, there are apparently a dozen or so Issey Miyake collections that we, the press, don’t get to see. They distill the often-obtuse influences of the main line into palatable edits. They do a lot of the pleats, for which they are frequently so well known, and which frequently fill most of their stores.

It may be a cash cow, but the trouble with something as ubiquitous as Miyake’s pleasing pleats—and, to be frank, something so frequently and readily referenced by other designers—is that you get bored. As a designer and as an observer. So, how to experiment without alienating? How to offer something new without losing your identity? That’s the issue Issey Miyake’s menswear designer Yusuke Takahashi tackles every season.

Generally, Takahashi eschews pleats—which is a wise decision. Instead, he founds the house’s menswear collections in fabric technology and a sense of ease—the ethos of pleats, without the folding. For Fall, he called the show Neonomad, a cluster of scrubland grass around the runway providing a nuance of the alien. It felt a little bit spaghetti Western, especially against the concrete architecture of the Palais de Tokyo, a French civic center with a Japanese-inspired name. How’s that for travel already?

The clothes themselves were inspired by disparate cultures—that old fashion cliché of a gone roamin’ show mashing together Mongolian knits, horse riding, a few dresses and skirts for men, and sarouel-wrap trousers, visual shorthand for the exotic. The “neo” bit came through in the aforementioned garment tech, in Takahashi’s bubbly horsehair knits or fabrics described as wrinkle-free, form-stabilizing, functional, lightweight, washable, non-iron. All the things a peripatetic modern life may demand of clothing—the ills of contemporary travel, solved in one fell swoop.

I’m not sure that’s best summarized by jarring jacquards of horseshoes (more Westerns) whose graphics resembled either Ettore Sottsass’s taste-traversing extremes or the cast wardrobe of ’80s teen sitcom Saved by the Bell, depending on sophistication of eye. I sat with the latter. Go-faster cycle shorts in brief knits were also an odd departure (for Fall, anyone?). But the photographer Kenji Hirasawa’s striking thermochromic imagery, printed boldly on Takahashi’s garments, gave them not only a psychotropic trippiness, but a sense of the living human beneath. Their physicality, sure, but also their needs, through cloth. Which was at the heart of this collection’s odd appeal.