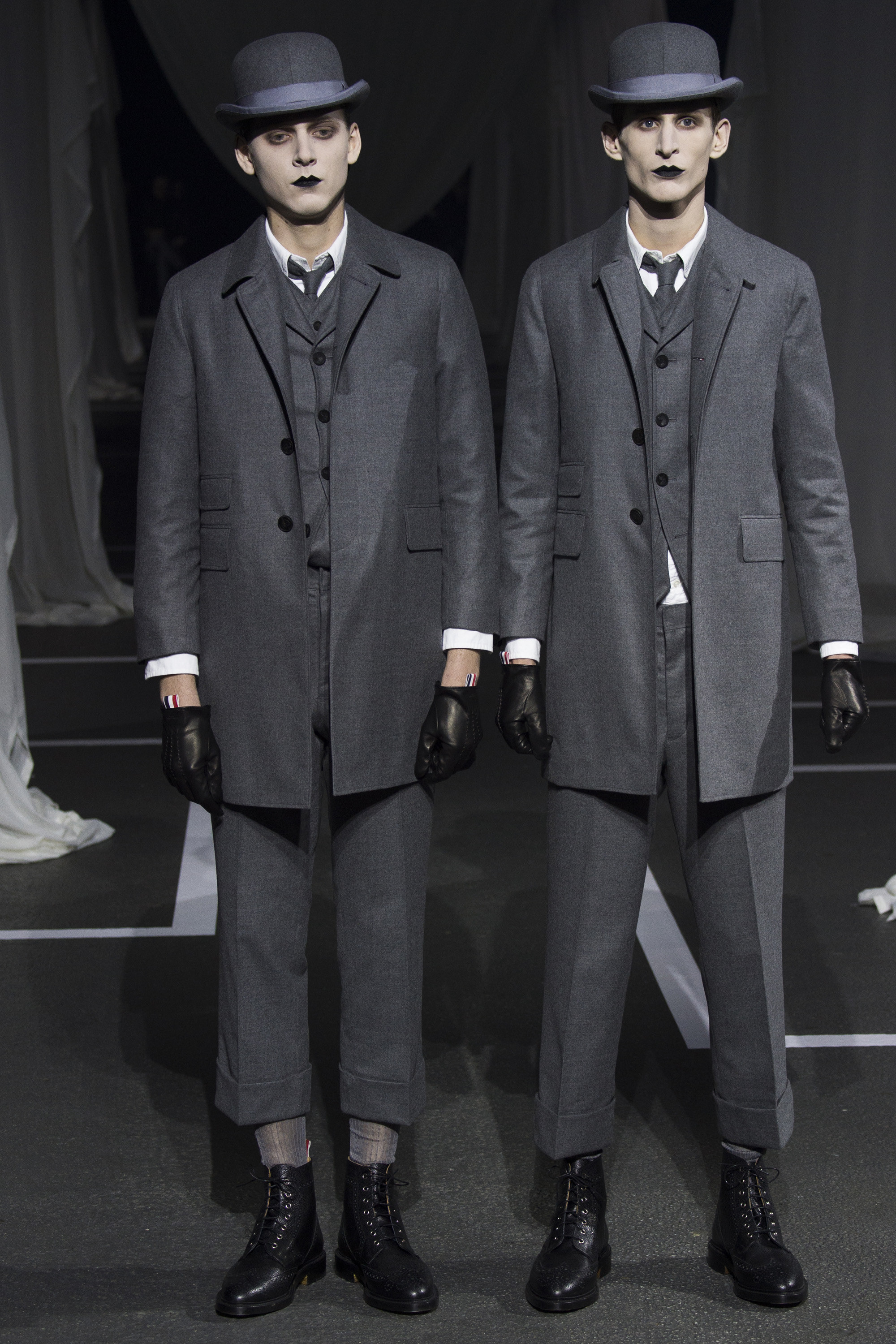 Nostalgia is a powerful thing, as this season has proved. If people weren’t denouncing it, they were announcing it as their next great inspiration. Remembrance of things past has a powerful pull for fashion, where revivals of past decades are ever-spinning in ever-decreasing circles. Incidentally, Yves Saint Laurent loved a bit of Proust—there’s a Louis Vuitton case specially made to carry his volumes currently on display at the Grand Palais, in an exhibition devoted to that brand’s storied history. Vuitton, I mean; though there’s a Saint Laurent museum just up the rue.

The strength of recollection was the idea Thom Browne explored: His Fall show was, he said, about 13 guys revisiting their gentlemen’s club of 30 years ago, maybe physically, certainly mnemonically. Hence the fact each outfit appeared in triptych: the first in rags; then a light level of distress; finally, pristine. Each featured variations on classic masculine attire—tailcoats, military overcoats, fur-trimmed chesterfields—and was topped with a bowler hat tipped eerily over the face. It wasn’t a process of disintegration, but of regeneration, returning to former glories. At the start, a pair of models whipped dust sheets off the set dressing of an old-boys’ club, including a grand chandelier, wing-back chairs, and a baker’s dozen of gilded frames.

In À la Recherche du Temps Perdu, Proust falls into raptures over the memories evoked by a tea-dunked madeleine. There was plenty of similar food for thought at Browne’s show: involuntary memories—notions evoked unintentionally, but which are often just as powerful. As the models took their place, the perfect original facing a duo of “imperfect” counterfeits, it was easy to see shades of Dorian Gray—not just because of the color of Browne’s favorite wools. Those savaged models could be his ravaged oily portrait, whose lust for youth so reflects the system of fashion. Aren’t we all forced to witness our own decay these days? And isn’t time the one thing even the richest can’t buy? We can’t turn it back, certainly. Time was an obsession of the artist René Magritte, and there were undoubted echoes of his work in the masking bowler hats, the repetition, the empty frames.

Time is something designers have oft parroted as being true luxury, especially in the last couple of years, when it’s become more and more precious. It took lots of time to make these clothes, too, which were unquestionably luxurious. Some of the patching, distressing, and intentional wear and tearing undoubtedly made the imperfect more labor-intensive—more perfect—than the unblemished outfits. “Sometimes it’s more beautiful,” mused Browne, of the loosened pearls embroidered on a short cape and jet-embellished tailcoat.

You also remembered runways from times of yore, when designers really went all-out to stage a show, to evoke a story through their garments. There aren’t many left of that old school. Maybe times have changed; or maybe designers just don’t have very much to say, or the time to say it, in the accelerated system of the contemporary runway. Thom Browne stages a show each menswear season; he presents Pre-Fall collections and shows womenswear in barely two weeks’ time. Time is undoubtedly on his mind.

Good fashion can speak on many levels. Ramble on about Oscar Wilde and Proust and Browne may blink blankly (he did to me). At its base, this show was also about an inventive way of showing engaging clothes, beautifully made, but with hidden meaning embedded in every seam. One to get nostalgic over, when you’re in remembrance of great fashion shows past.