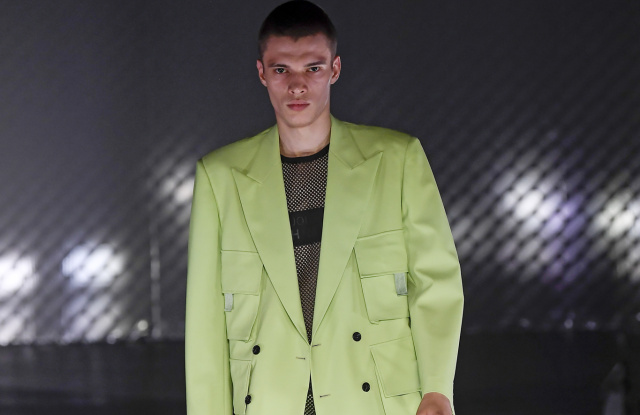 “Boys will be girls, and girls will be boys,” said a buzzy John Richmond backstage before his Eighties-inspired co-ed show.

“Boys will be girls, and girls will be boys,” said a buzzy John Richmond backstage before his Eighties-inspired co-ed show. The designer said he wanted to revisit some of the decade’s classics and spin them into something for a younger generation. He also aimed to smarten up street with tailoring, and keep both the men’s and women’s collections chic, “but relaxed.”

This was one of Richmond’s best shows in awhile, with a tighter, more commercial lineup: For men, there were boxy tailored suits, some with a snake scale print, others with a writhing serpent pattern, and jackets and trousers with patch pockets and utilitarian details.

Bleached-out tie-dye jeans with big cuffs looked young and summery, as did tailored suits paired with shorts. They came in citrusy shades like faded lime. With his eyes locked on Eighties London – where he first launched his own label – Richmond also sent out a lineup of men in knee-length pleated skirts, although it remains unclear what sort of pickup they’ll get south of the Scottish Borders.