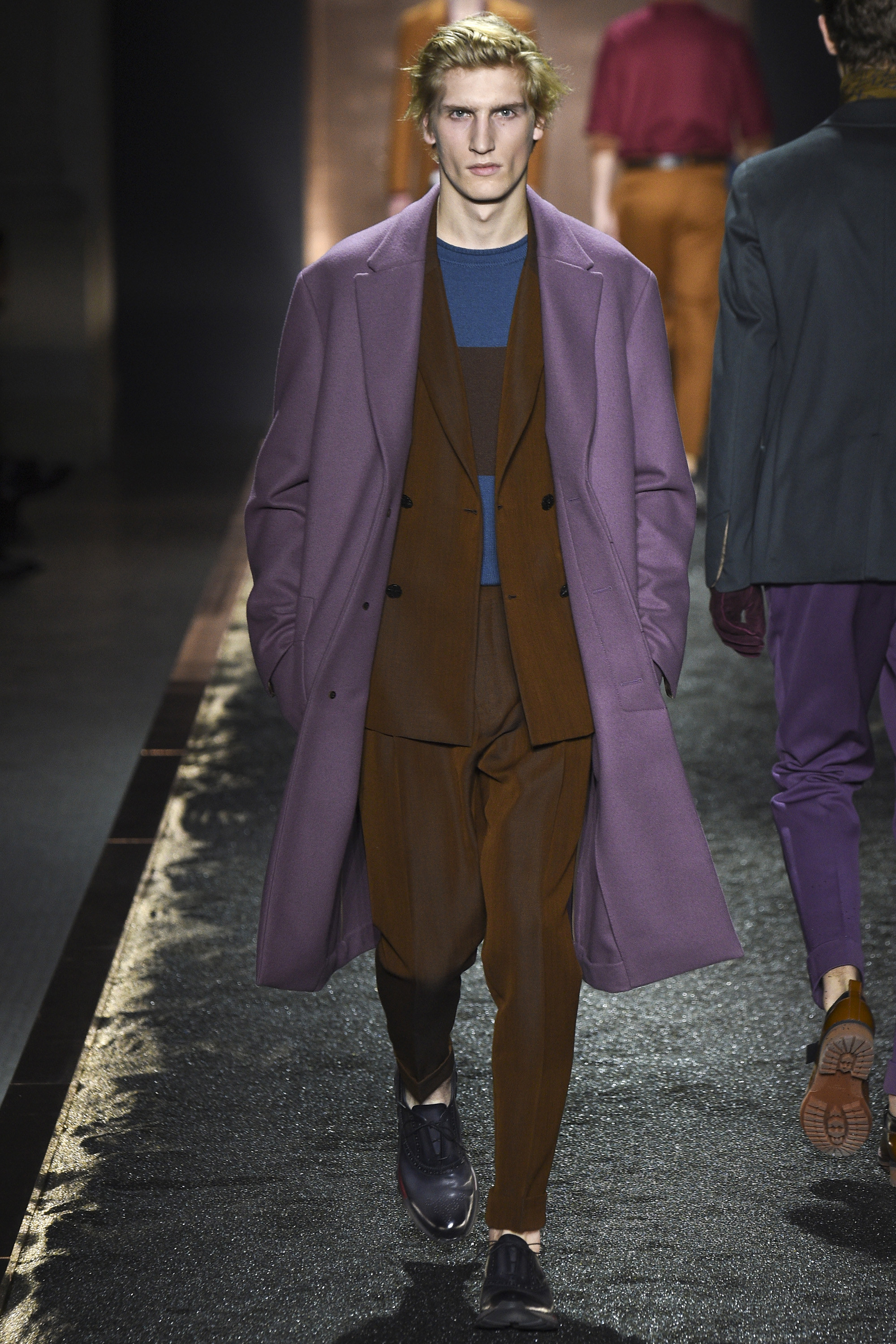 What does it signify when you show your first five looks in darkness so inkily profound that all the audience can see is the barest underlit shadow of your brogue-trainers and bronze-capped, abstractly stitched formals? Answer: You are either atrociously, delusionally arrogant, or you are rather brilliant—and confident enough to know it. And perhaps you are the creative director of a brand rooted in shoes. Happily for the balance of critical karma, in this case the answer was the latter.

Once the spotlight sun finally rose, it revealed a collection notable for a two-fold advance in Alessandro Sartori’s Berluti proposition. He had several collaborators; the palette of Marfa (where he travelled to research), the geometry of Judd (whose work he went to see), and the designs of Scott Campbell (a vogue-ish New York City tattoo artist with whom he partnered). Campbell’s additions—stitched snakes on the back of bombers and shoe-uppers, as well as abstracted Aztec grids on (fake) tattoos and more jacket reliefs—added a new thematic patina to the Sartori-Berluti proposition, which has until now been quietly about elevated taste and fabrication. Judd’s installations provided the inspiration for the rectangular grid jacquards of wools and leather in topcoat and bomber.

Super-notable addition two was consistent with Sartori himself who, despite working within a narrowish remit, makes ultra-luxe menswear with a formal heritage that is actually very inventive. Today’s innovation would have piqued the interest of Margiela, yet was functional as well as sartorially transgressive. A tailored jacket, featured above this review, had one set of sleeves, one back, but two fronts and two sets of lapels. This made it look a little as if the wearer had just gone on a shoplifting spree and was trying to wear his ill-gotten gains out of the store. But the idea of having a double front to a jacket—to provide both protection done up and silhouette undone—was quietly wonderful. If Sartori isn’t careful it will become like Gillette vs Schick: Next season some derivative devil will produce a three-fronted jacket, and he’ll feel obliged to respond with four.

The colors were transiently desert-tinged garnets, but had plummy richness too: the seabird eggshell blues and raspberry that gently extrovert Berluti man has grown accustomed to. The shearlings were quintessential examples of themselves. This collection contained almost as many potential angles to elucidate excellence in menswear as there were grains of volcanic sand on the runway—but that would keep us here all night.